2 months from Friday 1st September, Team 5 had been running and training to achieve our personal best. It’s the event that we have been training for. That’s Right - The Cross Country Fun Run for 2017. I love training. Training helped me get more fit and faster for me to have my turn running at our, Cross Country. I was so excited. 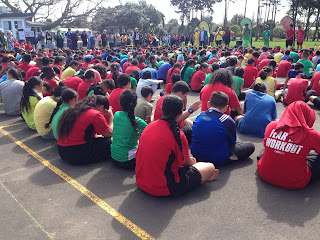 Finally, last friday was the special day, Pt England School had been training for for a long time round. Cross Country Time. For that special day, we had an early lunch time. During then, we had to get changed into spare clothes that we had brought from home. They mainly had to be the colour of our houses. The house colours were - Yellow (Hikianalia), Blue (Hinemoana), Green (Hokule’a), and finally, Red (Te Aurere). I was in Hokule’a, the Green house.  And then, at 1:00pm everyone had to meet on the hard courts near the field. The court was filled with bright coloured students ready to compete and run. There were a lot of younger kids that would just get up and dance to any of the songs they knew that were playing throughout the rest of the day.

For the year 7 and 8 students, we had to run 2 laps around the, Pt England Reserve to reach the finish line. Altogether, we had to run 3 kilometres. Year groups had passed and all I heard from the front was, Mr Jacobsen say, “Year 7 girls, it is your turn to run.” I stood up slowly and tried to look proud and excited to run, but really inside, I had butterflies in my stomach and in my mind, I was feeling more nervous than excited now. I felt really excited before it was my turn to run, but now, I was feeling so scared and nervous, thinking about what place I would come. Would I come last or near the end. Furthermore, I remember what my teacher had said to me. She used to always come No. 46 out of 50 when she ran, but she was proud of herself for pushing through the pain and never stopping even when she thought she really needed to give up. She never ever gave up on herself. So… that is exactly what I needed to do during this competition. I just needed to pace myself. Jog lightly and not sprint. I later on realised that when I was pacing myself, I never needed to stop. I was told that when you keep going and then you stop, it is really hard to start running/jogging again at the same pace.

On the track, parents had just shown up to become marshalls and help tell the runners which way to go and what puddles or obstacles to watch out for, so that we keep safe. They encouraged the runners to keep on going to the end. I took their advice and ran for as long as I could. As soon as I was about to reach the finish line, I could hear heaps of people cheering for me and I could see my whanau standing by the finish line. They looked so proud to see me finish the race.

To this day, I still don’t really know what place I came after I had finished. I realised that it didn’t matter if I came near the end, it only matters that I never gave up and completed the race. For me, it was a big accomplishment to complete the run with only a little bit of training before. I feel so proud of myself to know that I didn’t give up. So, this is a message also to those people out there who think that they’re not fit enough or fast enough to complete the race. Well, it doesn’t matter how fit or how fast you are, as long as you pace yourself and never give up or stop. Note that it is harder to start again once you have stopped. Try your hardest to achieve your personal best.