On Wednesday 20th November, the year sevens were fortunate enough to visit Rainbows End. This is a trip that we hold every year, to celebrate the end of year seven, before we come back as the leaders of the school.

We spend the entire day there; we get into small groups with a parent helper and then get to explore the park with them. Here is a promo movie of the trip, we hope it will prepare next years year sevens for the amazing event!


Hi everyone Room 5’s movie is based around Stan Walker’s song Give.

As you’re watching, take some time to think about your family.

Think about all they’ve done for you

All they’ve given you

From one generation to the next

Email ThisBlogThis!Share to TwitterShare to FacebookShare to Pinterest
Labels: 2019, Give, Manaiakalani Film Festival

As part of our inquiry, every class who goes through Room 5 will be learning about the beautiful and graceful Siva Samoa. We are very fortunate to have Mr Wright to help us and take the boys through a fa'ataupati which is a slap dance. The girls however, once they learnt about the meaning/storytelling behind the actions, were able to choreograph their own actions for their siva Samoa. Check out the girls and boys from Room 1 in action.

Immersion Assembly for Term 4 was definitely an entertaining one with a dance and drama focus. Our inquiry this term is 'Life's a Stage'. Here are Team 5 teachers doing their best to entertain and act coordinated. We are covering dance in our afternoons learning about different styles of dancing from around the world. In our literacy classes we are covering drama in short skits and acting out different fairy tales with our own spin on it. We were quite proud of our team of teachers in Team 5 for getting up on stage and giving it a go.
Posted by Latini Ilaoa at 14:37 1 comment:

This term Team 5's science inquiry is about Genomics which is biology looking at cell structures, DNA, sequencing and how all living things are connected.

We've finally got up to the part where we learn about human cells and the nerve system. Here is a short video clip that our Team 5 teachers did as part of our immersion assembly at the start of the term. By the end of this term, we hope to know this off by heart.

Posted by Latini Ilaoa at 09:37 No comments:

Walt: Learn about the zebra-fish

Task description: Over the past week we have been learning about zebra-fish and they're very interesting. Did you know that Zebra-fish are the only animal with organs most like humans? Wicked thought right? So although we look physically more like the monkey family, Zebra-fish are the ones who have the same organs as us humans. Check out our slide deck for more information.
Posted by Latini Ilaoa at 09:43 No comments:

Can Science explain the origins of life?

Walt: Can science explain the origin of life ?


Task description: Today we watched a video about the question can science explain the origin of life?

Posted by Latini Ilaoa at 09:39 No comments:

Our group goal for this term is to share our learning onto our blogs and be able to write 2-3 sentences about what we are learning. Check out Silafaga's blog post about Jack and the Beanstalk.

Posted by Latini Ilaoa at 12:22 No comments:

Term 3 Immersion Assembly: There's something in the water

THE WONDERS OF THE OCEAN
(Point England search the sea) 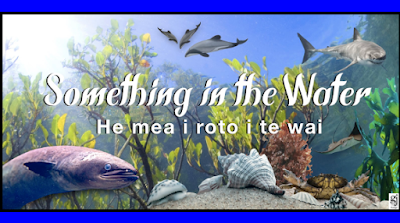 The beginning of the journey- On Monday 22th of July Point England had an immersion assembly. As the second school bell rang many kids came walking into the hall. Our Theme for term 3 was Something in the water or translated in Maori "He mea i roto i te wai". They were confused as our principal, two other teachers & our school prefects were cooking seafood for all the kids & teacher that would like some. There were prawns & different type of fish to eat. They we very delicious.

The movies of the sea- There were many videos that were presented as we ate. Team 1 had an amazing video. Team 1's video was about S.O.F.A which stands for solution of animals.  There movie was about the endangered animals that lived in the sea down at Point England beach. There were different types of animals facts in the videos.

Team 2's Movie was about animals, trees & plants. There was different types of animals that they were looking at such as seagull, ducks, chickens and many other sea creatures. There were also looking at a Pohutukawa tree. My favourite part was the ending when one of the teacher name Miss Moran. She was so hungry & bored that she asked if she could go online to Uber Eats & get some KFC.

Team 3's movie was about a stronger independent women who wanted to look for a sea creatures that loved the sea & all the animals in it. She searched & searched then came a eel she asked "are you the one I am looking for the one who can look after our animals in the sea" the eel replied " yes I can swim all the way to Tonga & back real fast " She said no I don't need someone like you. She talked to many animals but they were not what she needed until she came across a strong, wise creature. She asked him the same question it replied I have been a look out for ships, humans & our animals. I want to protect our ocean from any harm. You are the one we can work together to look after our ocean & animals.

Team 4's movie was about different things that live in the ocean including what animals eat & what we eat. There were plantains, mussels, crabs & seagull. We learnt that plantains get eaten from mussels & mussels get eaten from crabs. The crabs get eaten by seagulls but the weird part is that humans eat the seagulls anyways. Team 4 have been learning about different animals they see in the sea & compare to what they eat & what eat them.

Team 5 Had a song that they had made up into one big thing about what we would be learning about this term. The song was about cells & what was in them. There were nucleus, genes, DNA & chromosomes each & all of these were in cells. Team 5 was going to be learning about science - Genomics & the origins of life.

Posted by Latini Ilaoa at 12:29 No comments:

Email ThisBlogThis!Share to TwitterShare to FacebookShare to Pinterest
Labels: 2019, immersion assembly, Team 5, Tehillah, Term 3, There's something in the water

What have I learnt this term?

Our topic this term was a technology based topic around coding delivered through a social studies pathway. "I like your latitude" took us around the world as we discovered the answers to our questions such as, where in the longitude and latitude are you?

Check out Tha Zin, Jedida and Zaeeda's poster about what they've learnt.

Posted by Latini Ilaoa at 15:42 No comments:

Email ThisBlogThis!Share to TwitterShare to FacebookShare to Pinterest
Labels: 2019, I like your latitude, Jedida, Term 2, Tha Zin, Zaeeda

This term, the students of Team 5 have been exploring different countries around the world as we learnt about the locations of the seven continents. We also spent time learning how to code using Scratch. We took this information and our own Hyperstudio drawings to create our own scratch animations. Here is the movie we showed on PENN this term to showcase some of our work.

Posted by Latini Ilaoa at 09:51 No comments:

A couple of weeks ago, the Year 8 students from Pt England School headed off for 3 days and 2 nights to Kauaeranga Christian Camp in Thames. It was an awesome chance for them to step away from their usual school life and take on new challenges and experiences in an unfamiliar environment together with their classmates. Check out Part 2 of their time way in this short movie that screened on PENN (Pt England News Network) today. Enjoy!

Posted by Latini Ilaoa at 09:46 No comments:

This is our theme for Samoan Language Week 2019. In Team 5 we've enjoyed learning words and phrases we can use everyday like saying "tulou". Always excuse yourself if your movements are going to obstruct the view of others.

Check out some highlights from todays assembly.

Posted by Latini Ilaoa at 13:59 No comments:

Where in the longitude and latitude are you?

The first part of our inquiry in Team 5 is to navigate our way around the world map. Understanding that there are 7 different continents and in those continents are many different countries such as France, Brazil, America and China. Here are a couple of animations to show you what we've been up to.

The first movie is by Zaeeda and Tha Zin and the second by Jedida and Leilani. Stay tuned later on this term for the 2nd part of our inquiry using our animations in scratch! Enjoy!

Posted by Latini Ilaoa at 13:24 No comments:

As part of Aces groups' create task, they had to think of 6 places around the school which held fond memories. They then took photos of these places and wrote a short description of their memory at each place.

Posted by Latini Ilaoa at 10:04 No comments:

Check out one of the students in Room 5 and her family's journey.

Hello and welcome to my family's journey. In this I will explain things about my family. I have always lived in the same place in the same house at the same school and I haven't changed ever. So my family journey isn't the most interesting but I hope you enjoy the graphics and writing I left the voice over doesn't explain everything so remember to leave a comment when you've had a look :) Zaeeda's Family Journey from Hi on Vimeo.
Posted by Latini Ilaoa at 14:49 No comments:

Who am I? What do I value? These were some of the questions we've been looking into for our inquiry this term. As part of that, we've created a visual mihi to showcase our identities, cultures, hobbies and families. Here is Room 5's visual mihi. The song is the 1st song in a medley by Tone 6.
Posted by Latini Ilaoa at 10:42 1 comment:

Check out some of the things that make Team 5 such a cool place to be learning in. Thank you to Mrs Stone and Room 4 for the video. Don't forget to leave a comment!
Posted by Latini Ilaoa at 09:28 1 comment:

They are smart. They are curious. They are eager to get serious. Serious about their learning that is. Introducing the beautifully & wonderfully made students of Room 5 for 2019!

These will be the student who's work will be populating our Room 5 blog throughout the year, sharing their learning and creativity for all the world to see.

We've got a class of 31 fun, quirky, some serious & excited learners. They each come with their different personality but so far has blended nicely into creating a comfortable and friendly classroom environment.

Our ongoing theme throughout the year is "Kia pai te kotahi" which means 'Better together'.

Please keep checking in throughout the year and remember to leave a comment as you go. We look forward to sharing our work as we Learn, Create and Share together!
Posted by Latini Ilaoa at 12:49 No comments: